The "Quote of the Week" segments in October will feature a spooky theme in honor of Halloween.

Last year, because of COVID, my sons didn't go trick-or-treating. Don't worry, they still got some candy. We ordered their favorites online. This year, when asked if they wanted to go out, they declined... Not because getting their candy delivered was so much easier than walking from house to house collecting treats... They think they are too mature to go out. It's the end of an era.

I have many fond (and some not so fond) memories of trick-or-treating with the boys. When they were really little, we all dressed up and pulled them in the wagon around the neighborhood... When they were old enough to go with their friends (but too shy to go without their parents), we stood at the ends of driveways, close enough to hear the chorus of angelic thank yous after they got their treats.

Even though they think they're too old for trick-or-treating, I'll still get them some Halloween candy. It won't feel like Halloween without it. 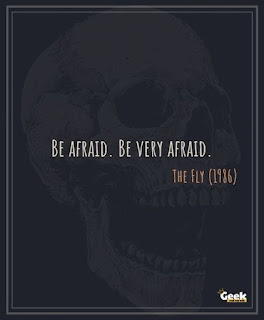 Stay tuned for next week's spooky quote... if you dare.