Welcome to the 2018 Maya's Musings Summer Series. In the past, I have planned special, themed guest posts, featured my own work, and re-posted popular posts. This year, I decided to write photo-inspired flash fiction. 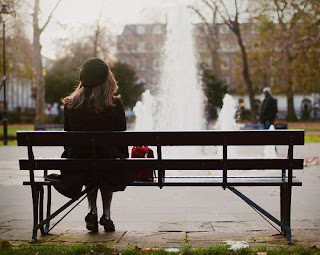 She had trusted him completely. Was there a man out there less deserving of her trust than Rowan Drew? If so, she had yet to meet him.

It all began when she was still Ms. Blair Cole, the newly minted Vice President of Operations. She thought seeing her name on a shiny brass door plate meant she'd made it in the business world. How naive she'd been. This world did not measure success, and it did not abide by laws. They—the powers that be—had sucked her into the belly of a covert criminal organization. And they had intricately laid a damning document trail making her appear as guilty as the rest.

Five years ago, the job had sounded like an amazing opportunity. Vice President of Operations for the largest import / export company—Drew Shipping Limited—on the west coast? For someone greatly interested in logistics, it was truly a dream job. Mr. Rowan Drew had personally interviewed her. She remembered that day clearly. When she entered the large conference room, sweating under her suit jacket despite the frigid air conditioning, Mr. Drew had greeted her, impeccably groomed and dressed in a designer three-piece suit. With an engaging smile, he shook her hand, holding it a second longer than required, and pulled out her chair. He listened to her responses with intense scrutiny like every word she said was of the utmost importance. His intelligent, dark eyes seemed to take note of every detail. He'd offered her the position, at the conclusion of the interview, quoting top salary and benefits. She accepted without hesitation.

It took her two years to discover the shipping discrepancies. How they managed to pull the wool over her eyes for that long still baffled her. At first, she suspected false billing. When she dug a little deeper, she found a hand-written shipment log in a dusty corner of the walk-in vault. Flipping through the log, she noticed that the dates corresponded with the digital log, but the manifests and shipping destinations varied greatly—with cargo like military grade weaponry delivered to hostile countries. She felt sickened by the duplicity she had involuntarily participated in. She had to stop these shipments, but who would believe her? Rowan? Her mind swirled with unanswered questions and burned with the guilty knowledge that these weapons could have hurt or killed innocent people. She took a deep breath and looked for additional clues in the log. Then she saw her trademark loopy signature. On the bottom of every page. Only, it wasn't actually her signature, but a masterful forgery. Her shoulders shook, and she swore she wouldn't cry. Rowan knew. He had to have known. It was a virtual improbability that he wouldn't be aware of a cover-up this deep. He had betrayed her. Once she regained her composure, she realized that, on paper, she was impossibly implicated and, with her signature on every manifest, the authorities had all the evidence they would ever need to charge her.

Blair clutched the manilla envelope, holding all the documents she had collected on the contraband shipments, including those that proved her innocence, in her lap. She stared at the fountain, spying a rainbow reflected in the spray. A good omen, perhaps? It felt like she'd been waiting for hours, yet a quick glance at her watch disproved that notion. Shelby Marks of the ATF would be here shortly. Then, she'd hand over the envelope, and Special Agent Marks would supply her with the ticket to her new life. Bye-bye, Blair Cole. Hello, whatever witness protection identity she'd assume until she testified against Rowan Drew and his shipping conglomerate.

She tensed at the sound of her name from the mouth of a very familiar man.

He sat down on the bench beside her, pressing a cold metal object into her rib cage.

"I believe you have something that belongs to me."

It wasn't a question. His voice was void of all emotion. The Rowan Drew she had known and loved had been replaced by this impassive stranger. She gripped the envelope tighter. Despair coiled in her stomach, and she knew it was over. Special Agent Marks wasn't coming. "They" had won.