An Excerpt from A Fairy Godmother's Redemption for #TirgearrTuesday

An invisible force tugged on his heartstrings. Shit. I’m complete shit at this parenting thing. “I’m an adult. It’s my job—” Right now anyway. “—to worry about you. Not the other way around.”

Madison’s eyes filled with unshed tears. “It’s all our fault.” She turned on her heels, escaping into her bedroom.

Mackenzie, looking tough as always, glared at him. “Now, you’ve done it.”

Resisting the urge to smack himself in the face, Drew pushed down the frustration of feeling like a constant failure. “Okay, I’ll bite. What’s bothering Madison?”

“We really liked Jana.” Mackenzie’s bottom lip quivered. “Madison was afraid she broke up with you because she didn’t like us.”

“Oh, half-pint. Jana did like you. She’s mad at me for something I did. Grown-up relationships are complicated, but—” He grasped for a way to explain that they’d understand. “Children are never to be blamed for adult problems.” His mother’s bitter scowls whenever she looked at him—whenever she bothered to be around—flashed in his memory. Not if I can help it.

Mackenzie plopped onto the couch, resting her head in her hands. “Daddy was going away.”

She spoke so softly Drew had to strain to hear her whispered words. It took him another moment to let their meaning sink in. Their father—his father—had been about to abandon another family. “What makes you think that?”

“We heard him yelling at Mommy.” She blinked away her tears. “Mommy told us she and Daddy were going for a drive. Our neighbor came over to watch us. And—”

She didn’t need to finish the sentence. He knew that had been the last time the girls had seen their parents alive. He clenched his hands into fists. That damn bastard. If he was still alive, I’d kill him.

“No, half-pint. Your dad was a selfish ass—jerk who only thought about himself.”

“Is it bad— that I still miss him?” Conflict flickered openly in her eyes.

“No, not at all. I’m sure you have plenty of good memories.”

“We do.” Mackenzie opened her mouth but closed it again without saying anything.

“What else is on your mind, half-pint?”

“Sera seems nice.” She squirmed in her seat. “Is she gonna be your new girlfriend?”

Drew stifled a chuckle. “It’s too soon to tell. Going on a date or two doesn’t mean you’re in a relationship.”

“What happens when she goes away? She’ll go on tour and forget all about us—you.”

“There are no guarantees in life, Mackenzie. Sometimes, you have to go for it and, you know, if it doesn’t work out, then you live with it.” 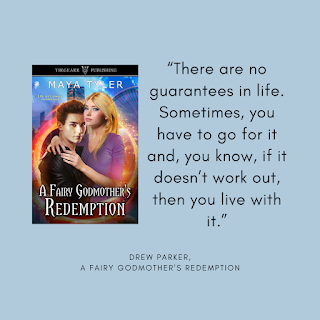 At the sound of Madison’s plaintive voice, he looked up and spied her leaning against the doorframe of her bedroom.

“Are you going to go for it? With Sera?” Hope warred with fear in her eyes.
***
In November, I plan to participate in National Novel Writing Month (NaNoWriMo)... #TirgearrTuesday will return in December... depending on how NaNoWriMo goes.
Posted by Maya's Musings at 1:00 AM