Featuring characters from Leading the Pack

Welcome back to 'My Character's Favorite Quote.' This week's guests are featured from Leading the Pack by David J. O'Brien.

Patrick smiled. Justin showed exactly how much he wanted to spill blood by calling Patrick Boss.

“No, Justin. You will say the word.” The word would be the last this man heard.

The word was werewolf.

In the Silver Nights Trilogy, a pack of werewolves live among us, hidden in plain sight. Their identity must remain a secret – unless exceptional circumstances occur.

Once the secret is revealed, the word Werewolf spoken aloud, death is usually imminent.

In the second book of the trilogy, Leading the Pack, new Alpha Patrick must control his pack and ensure they keep the word werewolf unsaid, but it’s not always possible. 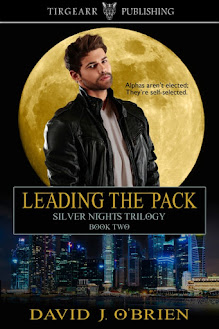 Life has been good since Paul McHew left his werewolf pack twenty years ago and married Susan. Patrick is the eldest of their four children and feels the pull of the full moon earlier than his father had.

Patrick itches for the city, but things have changed since his father's time. The economy is booming and everyone has a smart phone. But in a post 9-11 world, where security cameras abound, everyone is being watched.

Patrick must make the city streets his own as the eldest of a new generation. To do that, he must learn to control his own impulses, and those of his pack mates, if he hopes to become their leader.

Encountering a potential mate and facing a definite rival, can Patrick be the alpha everyone expects him to be?

Excerpt from Unleashing the Pack:

Patrick McHew strolled along a quiet street at sunset. A spring shower had cleared the air and left small puddles on the uneven pavement. Strings of horse chestnut petals lay along the gutters. The old trees standing up out of the concrete and asphalt shed no perfume into the coming night, but Patrick yet smelled the fallen flowers among the other scents emanating from the street.

He passed a kid of ten or twelve cycling around in circles on a BMX. A block away a young man in his twenties lingered on a corner. He watched Patrick approach, then turned away. An unspoken agreement had been reached. Patrick strolled past as if the man was as much a part of the street furniture as a lamppost or traffic sign.

Further on, a small group of teenagers leaned against the railings of a small park. Two of them pushed themselves from the railings and stood in the middle of the sidewalk. The other three stayed where they were, but stared fixedly at Patrick as he neared. Patrick instantly saw they were different. They dressed in the same kind of clothes—pants hanging down just as far—but these teens were from the suburbs. While the drug dealers and local street kids let Patrick and his friends pass through their territory the same way they let the trains and buses pass, these kids wanted to interact negatively.

Released to the city on the pretence of going to the cinema or some such legitimate pursuit, he surmised, their parents never discovered they found violence more diverting than the movies. These thugs always picked on weaker people and those in smaller groups, so they never went home with bruises.

The farthest one shifted his stance and took out his cell phone. Still leaning against the railings, he started to film the proceedings. Another annoying trend among the youth; posting their exploits on the Internet, even when those exploits were beating up other kids or stealing hats from strangers.

"What's goin' on?" one of the two blocking his way asked.

Patrick kept walking. He was now ten feet away and quickened his pace.

"You walkin' on my street?"

"You got to pay the toll," the other added.

Patrick shook his head, wondering where they'd got that line. It sounded like a bad eighties movie. The nearest two thugs let him pass without speaking; they wanted to surround him.

"You talkin' to me?" Patrick asked the nearest teen, imitating DeNiro. Before waiting for a reply, he lashed out. The heel of his palm slammed sideways against the teen's nose, shattering it in a spray of blood. The thug doubled over, holding his gushing face and cursing.

The others stared at their injured companion for a second, too shocked to react. The thug with the phone spun on his heel to follow Patrick as he passed by, his mouth agape.

When Patrick was already five yards away, they began to run after him.

"You'll fuckin' pay for that," one shouted.

Patrick began to jog, then broke into a run.

As he skirted around the block, he yipped loudly. The pursuing teens took this as a cry of fear. They started yelling, breaking into sprints after him.

Patrick looked behind and laughed. He ran fifty yards down the next street and then cut into an alleyway, the gang of youths at his heels.

As he passed by a dumpster, Patrick saw two men standing behind it. He pulled up short. Above him, on a fire escape, another five men stood.

One of these dropped to the ground behind Patrick.

Patrick turned around. The figures at the dumpster stepped out of the shadows. They smiled at Patrick.

He grinned back. "Say hello to my new friends."

The teens thundered into the alley and came to a halt when they saw Patrick had stopped.

When they saw the men step out from behind the dumpster they spread out, ready for a fight.

Then the other four figures dropped from the fire escape, landed light as cats on the asphalt.

It was five against eight, now.

The youths looked at one another and in unspoken agreement began to back out of the alley. Behind them, however, two more shadows materialised into the shapes of men, and slowly approached.

Patrick glanced right and left at the men now standing beside him; his own gang, his pack.