Welcome back to 'My Character's Favorite Quote.' This week's guest is a mystery character from Fated Always by Becky Flade.
“If you try to kick me, I’ll slice up your face, and I don’t want to do that. It’ll be harder on your parents and Sawyer if you make me cut your face. Understand?” 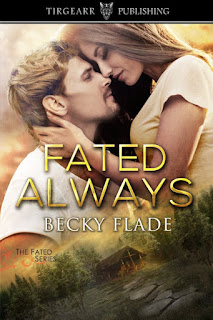 Book 4 in The Fated Series

When her best friend, Sawyer Gavin, roars into town on his motorcycle, Tala Gael thinks life couldn’t get any better. What she couldn’t have anticipated was his appearance heralding a time of change in her quiet, comfortable existence.

With her life turned upside down, Tala resists Sawyer’s advances, clinging to the familiar. Tragedy changes her mind, but as she takes the leap of faith into Sawyer’s arms, they find themselves suspects in a murder investigation. And Tala learns she’s not the only person in Trappers’ Cove keeping an impossible secret.

Jealousy is when you worry someone will take what you have; envy is coveting what someone else has; and both can lead to murder.

Featuring Fingin from Age of Secrets

Welcome back to 'My Character's Favorite Quote.' This week's guest is Fingin from Age of Secrets by Christy Nicholas.
In Age of Secrets, the main character, Fingin, is talking to his dog, Bran. They’ve just had to leave their home and are traveling through a strange forest, searching for shelter before night falls. “I already found someone who likes me, and he’s enough.” 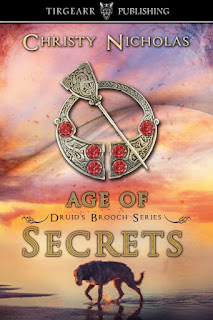 Fingin had no drive in his life until he finds a half-drowned dog who becomes his best friend. That friend leads him to a cottage where a powerful woman sends him on a quest to find his grandmother. With his dog, Bran, and a donkey, Sean, they embark upon their journey. The problem is, his grandmother no longer seems to exist in this world.

Between falling in with a band of Fianna, nearly drowning in a river, and climbing to the rocky top of Skellig Michael, Fingin had just about had enough of this quest when some magical creatures sent him in the correct direction.

Once he finds his grandmother, he realizes nothing works out as it should have. She is far from what he remembers and even further from what he’d expected. And she entangled in a power struggle of her own and has little time to attend her wayward grandson.

Soon, a battle ensues, and Fingin is caught in the middle. He decisions will have long-term consequences for himself and those he loves.

Featuring Hermione from One Night in Budapest

Welcome back to 'My Character's Favorite Quote.' This week's guest is Hermione from One Night in Budapest by Lucy Felthouse. 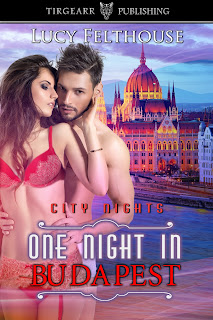 One Night in Budapest by Lucy Felthouse

An unexpected break-up means Hermione’s visiting Budapest alone. Determined to make the most of it, she goes on a night-time river cruise and meets Emil, sexy cocktail server. When he asks her out for dinner, she’s tempted, but she’s a long way from home and he's a complete stranger. She decides to take a chance, and what follows is an unforgettable night which will transform her life forever.

Welcome back to 'My Character's Favorite Quote.' This week's guest is Gillian from Dark Energy by Addison Brae.
“Damn promises. Why do I make promises that always get in the way of my own happiness? I’ll keep my promise and never let Pinkie down, but why do I always consider everyone else before me? Rule nine of my new fresh start—remember me.”
This is the ninth of ten rules Gillian creates for herself to help avoid life’s land mines. 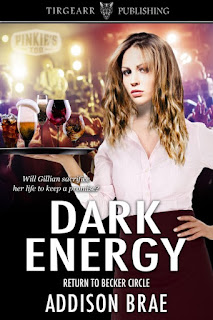 Cybercrime doesn’t talk. It creeps in and destroys lives right under Gillian’s nose when a cryptojacking scheme lands her boss, Pinkie, in jail. Gillian had just started over with a new career, boyfriend, and confidence after escaping a vicious murder investigation that shattered her ability to trust. Then Pinkie’s arrest leaves her struggling to run his two bars while also unraveling the conspiracy.

Gillian will not let her mentor and friend go down for something he didn’t do. Neither will Jon, the most talented musician on the bar’s stage and the perfect boyfriend...until his good fortune sends her reeling. Gillian forces herself to trust the cops, people who hurt her, and known criminals. Will it be enough to free Pinkie and save her life?

Welcome back to 'My Character's Favorite Quote.' This week's guest is Jack Slaughter from Slaughtered by K.A. Lugo.
Jack doesn't really have a saying, quote or motto, but he is adamant about finding the person or people who took his family from him. In his mind, without his family, his life is useless. This is his internal monologue.
Without Leah and Zoë, he had nothing to live for.
Character InfoJack Slaughter was once one of San Francisco's most decorated cops. Working in homicide, he and his partner and best friend, Ray Navarro, had taken down some pretty nasty characters. But the night his family had been taken from him—his two-year-old daughter and the family dog had been murdered and his wife is missing—he's been unable to keep himself from falling deeper and deeper into despair. He left the force and got his private investigator license so he can dedicate as much time as possible into finding out what happened to his family. And now, he has a stalker who tortures Jack every three months with texts telling him where to find his wife. Everyone of them a dead-end. 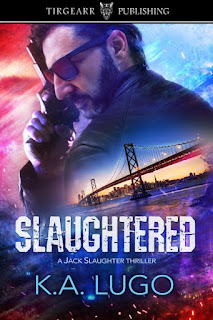 Slaughtered by K.A. Lugo
The Texter

Fallen San Francisco homicide detective, Jack Slaughter, closes the door on the home where his perfect family has been brutally snatched from him. Moving across the city, he works as a private investigator to fund his own investigation into what happened to his family—who killed his little girl, Zoë, and where is his wife, Leah?

Every three month for the last three years, Jack receives a simple text telling him where he can find his missing wife. There’s a body at each location, but none of them are Leah.

Jack hates missing person’s cases, but they’re his bread and butter. He only takes the case to find Carl Boyd's missing wife because the details of her disappearance closely match Leah’s. He hopes by finding Bonnie Boyd, he'll find his own wife.

Following the leads in the Bonnie Boyd case, Jack discovers someone has been killing women all over the city for the last three years, a fact Jack’s ex-partner and still best friend, Ray Navarro, has neglected to tell him. The city has a serial killer and officials haven’t been able to find a single lead on the person they’ve dubbed The Butcher.

Could Bonnie Boyd’s disappearance be linked to The Butcher? More important, was Leah one of The Butcher’s victims? Could he have gone so far as to murder a child?

With every clue Jack weaves together, the more his own life unravels.
Buy Links:
tirpub.com/kalugohttp://www.jackslaughterthrillers.comhttps://www.amazon.com/K-A-Lugo/e/B07MXPGHQK

Excerpt
As a private investigator, he had never needed to carry a weapon. As proficient as he was with a gun, he was equally as lethal with his fists. Fortunately, he also had rare cause to use them. Physical violence was rarely called for when he was searching for missing spouses and lost pets. And when he worked security jobs, he opted for a baton and pepper spray over a gun every time. Less paperwork that way when taking down assailants.
Inhaling deeply to steady his nerves, Jack pulled the box toward him. The small dial built into the lid glared up, as if taunting him. Beside it were two small lights. The red shone now, telling Jack the box was securely locked.
Could he remember the combination? Of course, he could. How could he ever forget the date his life had changed forever?
He held his breath as he spun the dial one way, then the other, and back again until the red light turned green, telling him he’d got it right.
He hesitated before lifting the lid. He’d only ever planned on using the weapon three times—the first for the range qualification in order to keep his CCW permit up-to-date, the second when he found the person who’d killed his daughter and taken his wife. The third and last time he would make the ultimate sacrifice to be with his family again. Without Leah and Zoë, he had nothing to live for.
Author BioK.A. Lugo is a native Northern Californian who grew up in Carmel-by-the-Sea, part of a larger community founded by artists and writers, including John Steinbeck, George Sterling, and Jack London. Over the years, she's worked with several Carmel notables, but it was in 1997 she left the employ of Clint Eastwood to live in Ireland for six months. It was during this time she met the man she would marry, and relocated to live in Ireland.While always writing since a very young age, K.A. earned her keep in Ireland as one of the country's foremost travel consultants who also wrote travel articles about Ireland.Since 2005, K.A. has published fourteen titles in genres including romantic suspense, erotic romance, and cozy mystery as Kemberlee Shortland, and now thrillers.Slaughtered is the first in the new highly acclaimed Jack Slaughter Thriller series, set in San Francisco, a city close to K.A.'s heart. Witness to Slaughter will be available summer 2020.
Posted by Maya's Musings at 1:00 AM No comments:

Welcome back to 'My Character's Favorite Quote.' This week's guest is Lacey Devaine from Lacey Goes to Tokyo by C.H. Lyn.
"I drop my hand to my side. I meet my own gaze, staring back at me in the glass. I am proud of this body. The strength on the outside that matches my inner strength. I flex my arms, watching the muscles ripple. I tense my core, and the little pudge under my bellybutton hardens like steel. I turn to the side, and the faint outline of stretch marks on my hips catches the light.
I smile. At myself. At my transformation. At my success."
This isn't something the character says out loud, it's her narration during the scene. Lacey goes through the unimaginable in her youth. This section, and this paragraph specifically, illustrates how different she is now. She is not the girl who was abused, she is a strong, powerful woman, more than capable of taking down her enemies. 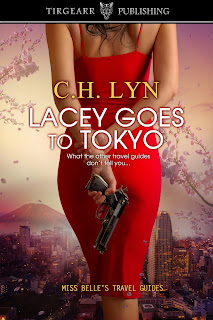 Lacey Devaine is a four-year veteran of a spy ring which fronts as an exclusive escort service, Miss Belle's Travel Guides. Maintaining her cover is Lacey's number one priority to protect the integrity of the operation she works for.

While on assignment in Tokyo, a nosy newspaper reporter threatens to blow the lid off a scandal that will put dozens of innocent lives at risk. To protect her cover, Miss Belle is called in to act on intelligence Lacey has uncovered.

Can these beautiful, intelligent, and deadly women complete this assignment in time and emerge unscathed? Or will this mission be their last?