An Excerpt from A Wizard's Choice for #TirgearrTuesday

The hair on the back of Kurtis’ neck stood up. His shoulders tensed, and his body moved into a defensive posture. Another thrall? Or something more sinister?

The air around him moved, and he caught the faint whiff of spicy perfume. Dee. His face curled into a disgusted scowl. What does she want now? She materialized in front of him, one eyebrow raised in an enticing invitation. She looked him over, giving him a thorough inspection that caused him to flinch. Showing weakness was not an option. He knew better. Planting his feet at hip-width, he crossed his arms over his midriff and plastered a look of indifference on his face.

Taking her time, she sauntered toward him. The V-neckline of her red dress dipped scandalously low. His breath hitched, from a conflicting mix of shock and lust, as his eyes followed every deliberate sway of her hips. He wrestled to regain control.

Something about Dee wrecks me on every level. 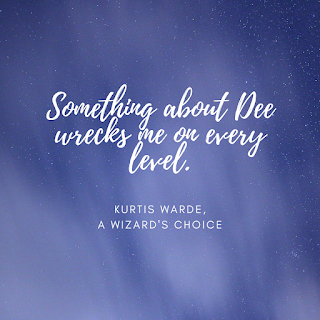 Her lips curled into a brief smile. She knew what she was doing. And she enjoyed it. With a coy smile, she stalked around him, stopping only to run her hands over his biceps.
Posted by Maya's Musings at 1:00 AM