Spotlight on The Magicals for #TirgearrTuesday

Who are The Magicals?

When I wrote A Vampire's Tale, I hadn't planned on writing a book series. My secondary character Kurtis Warde (see spotlight from last week) just needed his own story. Then a character I introduced in A Wizard's Choice, fairy Alina Lehrer, needed her own story. A book series was born. And I had, inadvertently, created my own magical world. 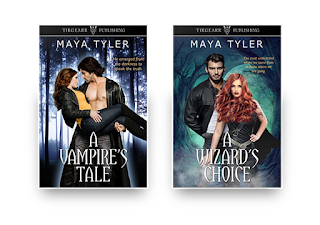 A Vampire's Tale introduced my vampires, Corgan and Dee, and a group of wizards called The Circle. Fairies and The Anunnaki, the origin species of fairies and wizards, were introduced in A Wizard's Choice. And A Fairy's Quest, coming soon, delves a little deeper into the fairies.
My characters live in a world of magical realism where everything is "normal" just with magical beings like vampires, wizards, and fairies. Vampires are a type of created magical as they are created by other vampires rather than born. Fairies and wizards are descendants of The Anunnaki, initially thought to be a spacefaring advanced civilization. We later discover they were fallen angels sent to Earth as a punishment. They were stripped of their immortality, but retained some magical abilities.

I'm currently working on The Magicals origin stories. So, stay tuned for more magic. And, in the meantime, you can get up close and personal with The Magicals Series.

A Vampire's Tale
A Wizard's Choice