The '10 Things About Me' series continues... So far I have hosted Karen Rose Smith, Madison Sevier, Karin Baine, and Jinxie G... Thanks again to all, especially Jinxie, my last guest!

Today I have the privilege of hosting romance author Summerita Rhayne... best known for sensual, emotional romance to sweep you away into another world.

1) I love to teach. Whether it’s simply coloring with little kids or going over complex human body processes with college students, I love to impart what I know and watch new knowledge take root in young minds…lol, that was a bit overdone. Fine, I confess, whatever the topic, I love to lecture!

2) I write in snatches of time. Lately my routine has become a bit rushed. Too many things occupying my mind. So I don’t get to concentrate for a fixed length of time, and have learned to write in brief snatches. My daily output is down to 200 words but I am happy to put down whatever I can.

3) I love to sketch. Not good but here’s an example of my efforts. My Indian friends would recognize him (or should). Okay, stop laughing! It’s supposed to be Hrithik Roshan :) 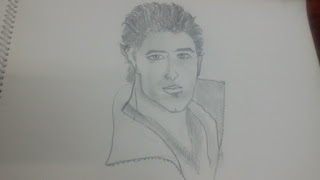 4) I’m not the tidiest person but I like order in some things. For example I would press the edges of currency notes and put them all the right side up, I like books put with the spine out and I search compulsively for the right word to put in my writing. I still haven’t been able to understand why I’m sloppy in most other things.

5) I’m a great procrastinator. It took me several years to get down to writing even though I have wanted to write for a long time. (Now that’s some procrastination!)

6) Sometimes, I dream of full-fledged stories. However, they can’t be used in fiction writing as they are lacking in logic.

7) I’m addicted to tea and coffee. I can go without food but not my beverages!

8) I carry three phones, a Blackberry for my typing, one for internet and a third to use for calls.

9) I’m multi-published in traditional publishing as well as self-published. But I’m still to decide which one has been a better experience.

10) I’m really very easy to please. No matter how angry I’m at someone, the tiniest gesture makes me melt. However, I must be convinced of its sincerity.

Bio
Summerita Rhayne writes contemporary and historical romance. She first got published in 2013 and has won contests with Harlequin and Harper Collins India. Writing, she finds, is the only way to deal with the numerous story ideas bubbling in her brain which pop up more rapidly than her keyboard can do justice to. Her pet belief is that a story and its characters have a life of their own and will find a way to make the writer pen them down.

Friend her at Goodreads:
http://www.goodreads.com/author/show/8505238.Summerita_Rhayne

Subscribe to her newsletter and win a collection of short stories: http://summeritarhayne.com/about-me/183-2/

Her latest released book is The Eligible Princess, a historical romance set in early medieval India. 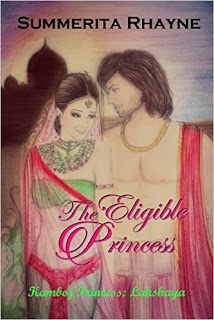 Here’s something about it.

King Kartikeya must marry a princess. He's determined to do anything to keep the kingdom that he has taken with strategy and sheer guts. If that involves charming a princess into marriage, then so be it.

Princess Lakshaya infinitely prefers her pursuit of scientific experiments to the learning of the arts of impressing a suitor. In fact, she would rather have no more proposals at all. But refusing a king as opulent as Kartik is out of question. Drawn against her will by the force of his attraction, she begins to accept him, only to discover hidden secrets along the way.

Can she bring herself to go ahead with this marriage?

Set in Early Middle Ages in India, Book 2 in the Kamboj Princesses Saga follows Lakshaya in her journey to discover desire, passion, intrigue and love.

She thought she could detect movement in one chamber and raised her vision enhancer to her eye.

The next instant, she gasped and nearly dropped the instrument. Recovering, she trained her eye to it again.

The king stood, handing his gold chest plate to the servant who was next handed the strings of pearls from around his throat. His armlets and cuffs came off. Then his hand slid lower and he unwrapped the gold belt from his kayaband.

Lakshaya’s hands nearly slipped from the cylinder. She could make out a vast expanse of skin. Male skin. Toned skin covering corded muscles. She had a view up close of how dark hair smattered across his upper chest, not thick, rather pleasing to behold as they thickened slightly. Muscles of his chest, bulging, moving as he – she gulped – as he now removed his kayaband. She trembled. Surely she should go now. A maiden shouldn’t observe a man undressing, should she? The servant was bid something. Maybe to prepare his bath? The uniformed man left. Lakshaya brought back the focus on the king. His hands went to the knot of his antariya. Just as her lower belly contracted, the moonlight came and flooded the courtyard as a cloud uncovered the lunar god’s visage. Light fell on the glass, momentarily blinding her. With a small gasp, Lakshaya moved back into the shadows. Regaining composure, she trained her instrument on the object of her fascination again. He turned till his back was towards her. He raised his arms and flexed and extended them by turns, his back muscles moving and bulging. Something contracted in her stomach, a strange fluttering attacking her pulse. Shame, excitement and anticipation mingled like magic potions to produce butterflies inside her stomach. He repeated the movement. For her, breathing became difficult. She lowered the cylinder, hands trembling, heart beating fast. Oh devi ma! She had to take control. Had to think...

After a breather, she raised it again, her mouth dry with the knowledge of the forbidden. What would she find now...?

He wasn’t immediately in her view. Frowning, she moved it from one wall to the other. Where had King Kartikeya gone?

A hand gripped her wrist and she gasped, dropping the cylinder. She had an impression of hair covered skin covering honed muscles and gasped anew as she realized who it was.

She had her answer as to where he had gone!

He had caught her instrument as it slipped from her fingers and now turned it this way and that. ‘A device for spying? Or was it peeking for your own benefit?’ Dark eyes snared her gaze. ‘Why strain your eyes, charuta. Have a look at the real thing up close.’

Thanks, Summerita, for participating in my summer series! I read The Eligible Princess and would highly recommend it! Next up is Rachel Thompson, joining me on August 26!