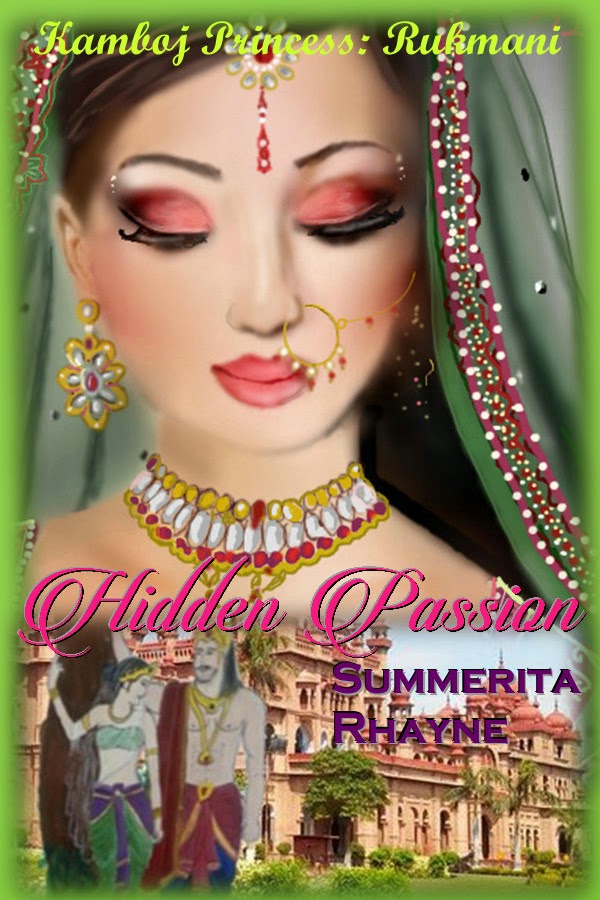 HIDDEN PASSION: The Story of Kamboj Princess Rukmani is a short historical read set in the Early Middle Ages in India. It is a sensual and passionate historical. The story is woven around Rukmani who is attracted to Deveshwaraya, a king. She finds that the path of desire and love is not easy, even for a princess who must face the hindrance of the imperial affairs.

Summerita Rhayne loves to write sensual and emotional romance. There's no knowing when some quirky - or sometimes even not so quirky - happening in daily life might trigger her right brain and then she's off craving a new story. She loves writing characters who learn and grow and find their way out of their troubles and emotional hang-ups. Hot, sensual heroes and sassy but sweet heroines mostly fit the bill in her stories. She also believes that a touch of humor never goes amiss in a book.

She divides her time between family, job and writing - and loves winding down with music, movies and the internet!

Excerpt from Hidden Passion
As he had taught her to handle the spear, she’d felt his touch. Inflaming. Hot. The hard strength of his body such a contrast to her own. Curiosity and desire had triggered an excitement, a longing to unravel the secret that made her feel all these things. To give in to the urges imbuing her senses.
Now touching him was like touching a hot furnace. She had no idea being in contact with him would feel like this. The sound of the spear falling to the ground was dull in her consciousness.
‘What do you think you are doing, rajkumari?’
‘I want you, Devesh. I want to touch you, feel your touch...’
‘This doesn’t classify under the hunting lessons.’
She ignored the cold jibe and she met his scowling gaze squarely as he half turned to look at her. ‘No, it doesn’t.  But don’t you think it’s time we acknowledged what’s there between us?’
‘And what is that?’ His lips curled contemptuously. ‘Put it out of your mind, princess. You’re too young to understand the implications of what you’re saying. It will be better for you to go back to the palace.’ He started to dislodge her spread hands from his body.
‘I don’t feel like going back. I want to be with you.’
He couldn’t have missed the change in her tone. Her voice had gone slightly husky. But far from responding to it, he chose to ignore it. He tried to draw away from her but she refused to let go. One hand lifted to trace the knot of the muscles. The indentation of the spine. All encased in firm silken flesh. He went as still as a rock. A heat wave ran through her, causing her body to tauten in need.
‘We are meant to be together...’
He turned to confront her. She was trapped in the dark glitter of his eyes, the predatory gleam that warned her even as it incited her.
‘You don’t know what you’re playing with.’
‘Then show me.’ The whisper hardly left her lips than he caught her in his arms and drew her close. She was pressed against him, hard body imprinting itself against hers. His arms banded her, strong like spear rods. Her legs felt weak, her lips parted and his gaze homed onto them. His head came down till his mouth covered hers.


This was what he tasted like. Honeyed sweetness and tangy passion. Spicy heat. Her thoughts lost coherency and all she could do was cling to him as he wreaked a magic she hadn’t dreamed was possible, on her senses.

Sounds intriguing? Are you ready to find your Hidden Passion?
Posted by Maya's Musings at 12:41 PM