Release day for The Swan's Road by Garth Petterson 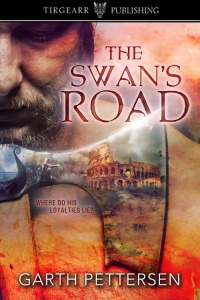 In the eleventh century, Cnute, the Viking king of Engla-lond and Scandinavia, sails with his son, Harald, and his shield brothers to Rome. Thrown off course by a storm, they follow the route up the Rhine. When Harald hangs back to assist Selia, a beautiful Frisian woman, his path turns perilous. Newfound enemies, retainers of Robert the Devil, Duke of Normandy, pursue them. Harald, Selia, and their companions fail to rendezvous with King Cnute, and are forced to travel cross-country on horseback. If Duke Robert's plan to assassinate Cnute succeeds, an invasion of Engla-lond will follow. Can Harald and Selia reach Rome in time to warn the King?

By the time I reached the inn, mid-night had long passed, but the time of birdsong had not yet arrived. The inn lay in darkness, though I queried a hint of light upstairs. Finding the front door bolted, with stealth I crept along a narrow gap between buildings and found my way to another entryway in the rear. The moonlight served me well and my steps made little sound as I opened the door. Leather hinges softened its swing and I entered. A stairway rose before me, and I sensed more than saw an open passage into the inn on my right. Keeping my body pressed to the wall I ascended the stair. Having my feet touch the treads on their ends stifled most of the creaking, but the structure had not aged gracefully and my passage created more noise than I wished.
Peering over the rim of the top stair, I saw a hallway connecting several closed rooms. A candle flame licked the last scraps of melted wax from its holder, which rested on the floor beside a sleeping man perched on a stool and leaning against the wall. I recognized one of the Norman lackeys. His chin rested on a chest that rose and fell in time to the sound of his breathing.
Taking four stairs in two stretches, I stood ready to proceed toward the sleeping man whom I ascertained to be a guard, as no man who can lie down chooses to sleep sitting up. My first step caused an inhuman groan to sound as the planking bent slightly under my weight. I saw the man's head lift, though his eyes did not open, and within two breaths his head dropped to his chest once more. As I took another step, drawing my sword at the same time, I thought, my friend, I'm going to save you from a very sore neck, by giving you a headache you'll long remember.
It took five long, slow strides to reach him. Lifting my sword, tip toward the ceiling, I brought the pommel down in a quick blow to the back of the guard's head. He toppled forward and I caught him, cradling him in my arms before he could hit the floor. After laying the man down gently, I turned to the door and quietly lifted the latch. The door swung inwards at my touch, with a creaking sound I could not prevent. At that moment, the candle finally flickered and died. I stopped in my tracks, my eyes trying to make sense of the room. No sound or movement came to my awareness, not even the breathing of a lady sleeping.
I took a soft step into the chamber. Then another. Before I could take a third step, a blade was thrust against my throat and a woman's voice whispered in my ear.
"And what would you be about now? If it's taking what's not freely offered, I just might cut off what a man doesn't want to lose."

Now, I am pleased to introduce the author of The Swan’s Road, ­­Garth Pettersen, who is joining us today on Maya’s Musings.
Q: Tell us something about yourself.
A: I'm Canadian, an avid reader. I'm both an indoor and outdoor kind of person. I board horses and ride. I assist in teaching disabled kids therapeutic riding. Computers and tractor engines freak me out, but I get by.
Q. How did you get into writing?
A: I won a writing contest when I was eleven and always believed I had a talent. When I retired from teaching, I set about learning the craft of writing and started to improve.
Q. How do you develop your plots and characters?
A: I start with a situation, create a protagonist and turn him or her loose.
Q: What inspires you to write?
A: Ideas mostly, and the rhythm of language. A good metaphor or a beautifully rhythmic sentence is like winning at the slots.
Q: Who is your all-time favorite character (from your books) and why?
A: Selia Fehr. She is the most consistently strong-willed character in The Swan's Road. And she allows herself to express a range of emotions.
Q: Do you prefer coffee or tea?
A: Depends on the mood. Coffee in the morning for sure. Tea on a cold day in the middle of the afternoon.
Q: What’s better than chocolate?
A: Sex of course. Trick question?
Q: If you believed in this sort of thing and could channel an artist from the beyond, who would it be and why?
A: Rosemary Sutcliff, a prolific English writer of historical novels, the best I've ever read. Thank you, Rosemary, where ever you are.
Q: What are your plans for the future? Where do you see yourself in five years?
A: I would love to have more novels finished and published, to have a large readership, to have many people ecstatic about my stories.
Q: Any advice for those aspiring novelists out there?
A: Write and get good feedback. Find a writers' group you are comfortable with and learn to take constructive criticism. Learn from your mistakes and write some more. When you're ready submit to contests and journals. Learn to take rejection and write more. Read about writing, e.g. Thrill Me by Benjamin Percy.
Thank you, Maya, for letting me ramble.


My pleasure! Good luck with your release! 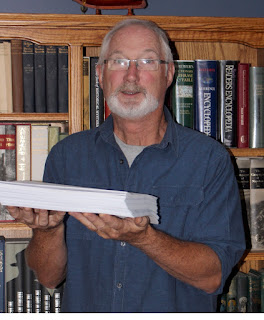 Garth Pettersen is a Canadian writer whose stories have appeared in journals and magazines such as The Spadina Literary Review, The Opening Line Literary 'Zine, and Dark Gothic  Resurrected Magazine, and in anthologies published by Main Street Rag, Zimbell House, Centum Press, and Horrified Press. He is a winner of the Blank Spaces Magazine Writing Prompt Challenge and has recently received an honourable mention in The Short Story America 2017 Competition. His fantasy novella, River Born, was one of two runners-up in the Wundor Editions (UK) Short Fiction Prize. The Swan's Road is his first novel.