Last week, I suggested using a style guide—an invention strategy. This week, I encourage you to block the critic (yourself) during drafting. I am guilty of editing and revising as I draft. Writing on a computer (with spell and grammar check) makes it easy to do so. Did you know that habit actually slows down, and stifles, the writing process? You invest precious time into sentences that may hit the chopping block later.

Recently, I wrote a short story using the writing process of invent, draft, and revise. 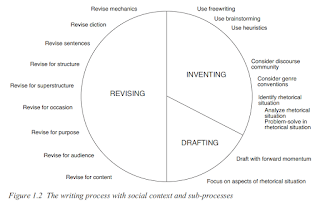 Gathering ample information—my story was historical fiction—before drafting allowed me to write without constant interruption. I know that a rough draft doesn’t have to be perfect, even factually correct. For this story, I highlighted sections I wanted to verify later—the date of such and such battle or when pockets were invented—without doing ad hoc research as I wrote. My story still required revision, but it’s easier to make changes than create.

As you draft, block the critic and just write.
Posted by Maya's Musings at 1:00 AM