I am pleased and excited to introduce my first guest in my month long guest takeover series. Welcome to Maya's Musings, Natasha Blackthorne! Without further ado, here's Natasha!

Thank you very much Maya for spotlighting my book today.

My heroines are not perfect ladies. They are wildflowers and wallflowers who enjoy flirting with the forbidden. Whether they are bold or shy, my heroines' strong desires and deep emotions drive the plot and drive their heroes to the point of no return.

To learn more about my books, check out my Amazon Author page and if you like what you see, please consider following me: http://www.amazon.com/Natasha-Blackthorne/e/B0056H8TY6/ref=ntt_athr_dp_pel_1

Or you can join my private reader's group: https://www.facebook.com/groups/NatashaBlackthorne/

If you wish to be notified of my new releases only please follow this blog: http://authornatashablackthorne.blogspot.com/

I also have a promotions blog, please follow this one for lots of blog hops and giveaways: http://natashablackthorneblog.blogspot.com/ 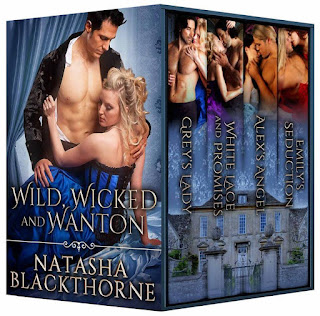 "He can see everything he is feeling in her eyes...a very emotional read that really had an edge." ~ Night Owl Reviews

"The emotional battle between Grey and Beth and within Grey himself was wonderful to read." ~ Dark Haven Maven Reviews

5 Stars: "Natasha Blackthorne's Grey's Lady really delivers, almost from the first page...And the sex...well...steamy...can't wait to read the next book in this new series." ~ A Chick Who Reads

Beth McConnell has a secret. Sometimes, in the afternoons, she escapes the drudgery of her family's shop and seduces wealthy gentlemen. One encounter is all Beth allows. She must leave them burning. When she boldly seduces Grey Sexton, a powerful shipping magnate, Beth finds his ice-over-fire combination of ironclad self-control and sensual indulgence too tempting to resist. Surely, one or two more clandestine trysts wouldn't hurt?

"The emotional battle between Grey and Beth and within Grey himself was wonderful to read." ~ Dark Haven Maven Reviews

Will be available to read for free through Kindle Unlimited upon its release Oct. 16, 2015. 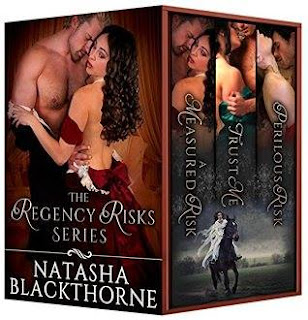 .
He is her most dangerous temptation and now he is demanding her submission. Dare she take the risk?
.
Book one in the Regency Risks Series
.
Emotionally scarred in the horrific accident that took her husband's life, Lady Cranfield is imprisoned by her lingering terror of horses and carriages. She longed to be closer to the fascinating Earl of Ruel. She sensed intuitively that he could teach her how to overcome the terrors that held her in bondage.
.
And now she's willing to risk almost anything-her reputation, even her virtue-to find out. But what he proposes startles her.
.
When the shy, studious and socially awkward young widow approached him, Ruel instantly sensed she would be the sweetest, most submissive experience of a lifetime-if only he can gain her total and complete trust. He makes her a non-negotiable offer. His help in return for her submission and obedience.
.
But Lady Cranfield grew up neglected by her ducal parents, raised by servants and then later ignored by her handsome, charming husband. She's learnt to protect her heart at all costs and she trusts no one but herself.
.
How can the jaded Earl of Ruel break through her self-protective defences and show her how to love when he has spent his lifetime avoiding that tender trap?

“Why did you run away?” His deep voice settled in her belly, rich and warm, like crème brûlée on a cold winter’s night.

“Because I wanted you to follow.” She tried to sound sophisticated and seductive, but her voice choked off on the last word.

Ruel placed his hand on the shelf above her head and blocked her path to the door.

His tall, solidly muscled body leaned over her, surrounding her with the sumptuous, sinful scents of tobacco, Scotch whisky and something masculine and undeniably dangerous. A slow, sensual smile stretched his hard mouth.

At the change, her insides seemed to flip over.

“Well, sweeting, getting us off alone was a very inspired idea.” He touched one of her fallen ringlets. “I am bored to distraction with endless talk of hunting and fencing.”

As he slowly wrapped the curl around two fingers, he brushed her collarbone. Fiery sparks tingled down her spine, so intense that she shivered. By some instinct she hadn’t even known she possessed, she arched her back, presenting herself for his assessment.

His eyes shone so vividly blue against his bronzed face that they resembled cornflowers. She swallowed tightly and wished for a long drink of claret. This more personal side of him suddenly seemed far more hazardous than his usually fierce exterior.

Well, no matter. There was nothing to fear. She would allow only as much contact as need be to get to know him a little. Since being torn from her lonely yet secure life in Ireland and thrust into Society at age sixteen, she’d spent her time allowing people only as near as was comfortable. She was an expert at emotional evasion.

It should be easy to regain her control.

But now, as rays of the late-afternoon sun played over his pale hair, turning it the colour of winter wheat, all her carefully rehearsed words flew from her mind.

Say something—anything—else he will think you’re a bird-wit.

An intimate smile, one that invited her to play, tugged at his mouth.

“In a situation like this, alone with a gentleman, it’s perfectly normal for a lady to feel some apprehension.” His hushed voice, barely audible above the piano and boisterous singing from down the corridor, accentuated their isolation. His gaze became so piercing that she had to lower her eyes.

He brushed his fingertips over her cheek. “She will invariably ask herself if he will try to kiss her.”

She jerked her eyes back to his face. God, he couldn’t mean to—not yet, surely…

Peculiar, heated chills swept over her. She tried to take a step back, but found her arse flush against the bookshelf.

He leaned closer; so close that his Scotch-scented breath tickled her face. “And just in case you are wondering, Lady Cranfield—the answer is most assuredly yes.”

She should demand that he put his arm down so she could pass by and leave. She really should. But she couldn’t stop looking at his hard mouth and wondering what it would feel like upon hers. He was so close to her that his breath blew on her lips. If she moved but a fraction, she’d be kissing him.

Dear God. Her breaths began to come very fast and short. Her throat went tight with a suppressed moan.

His eyes burnt as brightly as aquamarines. He looked so fierce. If he kissed her, if he dared… Oh God, it would be so harsh. That cruel-looking mouth could express itself no other way.

Excitement rushed through her, sending tingles to every point of her body, even her toes.

He kept leaning closer. He didn’t close his eyes. Instead, he seemed to focus all the harder upon her.

Her heart pounding, unable to move away, she braced herself for his assault.

His lips brushed hers, barely. A gossamer caress.

He lifted his head.

And it hadn’t even begun.

He held her chin, appearing so cool, so unaffected. His kiss had seemed to sear her.

An urge to put her fingers to her lips arose in her. She resisted it, for it would give away too much of how she was affected.

He traced his thumb along her lower lip, slowly, deliberately, as he studied her with eyes that now glittered with something powerful and predatory. Heat pooled in her belly..

She went weak all over, as if she’d lain in a sunny window seat for too long. Her knees almost buckled. She forced them to lock. To be strong.

It should not have affected her so profoundly. It had been just a peck—not a true kiss at all. William had poured out all of his skill upon her and hadn’t garnered even a tenth of the reaction in her that this man’s peck had.

Ruel traced her jaw line with his fingertips. Unthinkingly, she leaned in to his touch.

“Of course, once he has kissed her, then it’s his turn to wonder…” His voice sounded unnaturally loud in her ears. “How will she respond? Will she withdraw, or can he ignite some hidden fire?”

She sensed that he was toying with her. She didn’t understand flirtation—why had she imagined she could carry off this ruse? Was he making advances in order to have a laugh with Francesca and her simpering friends later? Hurt blossomed in her chest. She resented him for that. She ought to feel indignant, superior, uncaring—anything but hurt.

“Please don’t make sport of me.”

She cringed. Was that quavering, pleading voice really hers?

An infinitesimal pause. “Now, why on earth would I do such a thing?” His voice was as smooth as velvet.

“To please your vanity,” she replied, trying to regain her wits.

“Here.” He placed her hand to his chest. The contours of his muscles were hard, powerfully developed. Even more so than she’d expected. His body heat radiated through the satin and, beneath her hand, his heart’s beat was rapid and strong.

“Is that vanity?” He put a finger under her chin, giving her no choice but to face him.

The warmth in his voice settled over her like luscious hot chocolate. Melting her insides to quivering burgoo, rendering her speechless, unable to move.

“My dear, lovely Lady Cranfield, I am going kiss you again.”