Featuring Tavish MacLean from The Sins of the Sire

Welcome back to 'My Character's Favorite Quote.' This week's guest is Tavish MacLean of The Sins of the Sire by Emily Royal.

“Please, Elyssia, I beg you. I cannot continue on this path of vengeance. You’re not my enemy. Did you not once tell me that were I to embark on the path to vengeance I would have to dig many graves, including my own? For myself, I care not, but I must stop now before it’s too late, for there is one grave I have no wish to dig. Yours.”

Tavish, the hero of the novel, is motivated by vengeance. He pledged before the whole of his clan, to avenge the death of his beloved sister at the hands of an English nobleman, by abducting Elyssia, the nobleman’s daughter. But faced with Elyssia’s fortitude and courage, despite her captivity, he realises he can no longer deny his feelings for her, and begins to question his motives and his duty to his clan. This quote comes from a scene where he asks Elyssia to stay with him—as his lover, not his prisoner. 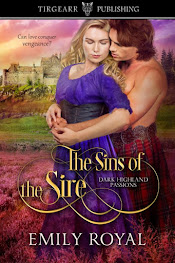 The Sins of the Sire by Emily Royal

Two years ago, English noblewoman, Elyssia De Montford, risked her life to free the Highlander held prisoner by her sadistic fiancé. She cannot forget the man who first stirred her heart–a memory that burns anew when she finds herself once more on the road to Scotland.

Tavish MacLean has sworn vengeance. It’s been six years since his beloved sister was raped and murdered by an English lord, a tragedy which almost destroyed his family. On his deathbed, his father demanded retribution and Tavish pledged before his clan to enslave the lord’s daughter then send her back to her father, pregnant with a Scottish bastard. When he learns that she is travelling north, he seizes his opportunity and orders her abduction.

But when his men fling the prisoner before him, Tavish recognises Elyssia, the woman who once saved his life. Loyalty to his clan trumps the debt he owes her and he claims Elyssia as his captive. Though she’s one of the hated English, her willing body ignites passion in him at night, though she fights him at every turn during the day. As time passes, he questions his loyalty, finding himself increasingly enthralled by his fiery captive.

Treachery surrounds Clan MacLean. When long-buried secrets come to light, Tavish must risk his life and his clan, or all that he holds dear will be destroyed.