Welcome back to 'My Character's Favorite Quote.' This week's guest is Red Farlow from Blue Magnolia by W.F. Ranew.

“To proclaim the two dumber than dirt would insult dirt. Each entered this world with a tail and back legs shy of a whole cow.”

—Red Farlow describes two wayward characters in my latest novel, Blue Magnolia. Their names are Swansy Elliott and Bugger Nelms. They are sad men with a tendency to violence—accidental and otherwise—and offer no redeeming qualities to stir pity for them. The two thugs cause no end of trouble for Blue Magnolia’s country singer, Hank “Cowboy” Tillman, a gentle soul who’s suffered his share of bullying.

A county song becomes one killer of a hit. 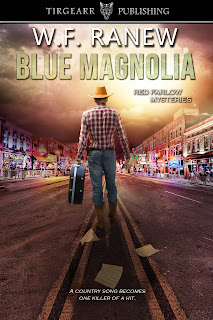 PI Red Farlow dives headfirst into a hornets' nest of extremists. His new client, Hank Tillman, only wants to get a shot at country music stardom. While playing in a Georgia bar, Hank—known as Cowboy to his fans—stumbles into trouble. The kind that kills. PI Red Farlow steps in to help him.

Hank’s song, Redneck Devil, attracts the attention of a violent group called the Blue Magnolia. Its leaders want him to perform at their next hate rally. There's another, darker reason the Blue Magnolia wants Hank in its fold.

An elderly patient in a Florida insane asylum reveals a decades-long secret that devastates Hank. It’s the worst kind of fake news.

Can Farlow root out the truth? The PI has his own problems as he confronts a hired killer face-to-face.