Featuring Solveij from The Cold Hearth

Welcome back to 'My Character's Favorite Quote.' This week's guest is Solveij of The Cold Hearth (#3 in The Atheling Chronicles) by Garth Pettersen.
"Remaining quiet is but a way to avoid harm, and in silence you learn to see what others miss."
This statement is made by Solveij, a Danish serving woman in the hall of Harald, in response to a young man saying he found her surprisingly wise for one who usually keeps to herself. Solveij attracts the attention of more than one man at Harald and Selia's hide (the amount of land that supports one family in eleventh century England).
Harald is the young second son of  Cnute, king of England, Denmark, and parts of Norway. With his Frisian wife, Selia, Harald hopes to build a life at a distance from the intrigues of court. Unfortunately, he is not the only atheling (throne-worthy), and all of the others are more ambitious than Harald, and more murderous.
Solveij is a supporting character in Harald's story, but like him, her strength is quiet and thoughtful, and not to be underestimated. 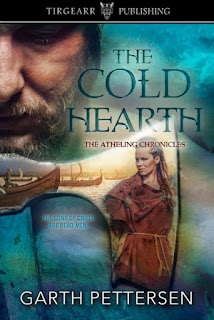 The Cold Hearth by Garth Pettersen

"The sons of Cnute are dead men." The dying words of his brother's assailant travel across the North Sea to the English Midlands.

Harald, the king's second son, receives the warning while rebuilding a hall where he hopes to farm and lead a peaceful life with Selia, his Frisian wife. But as the hall nears completion, they learn the family who lived there before them all perished in a single night of bloodshed. Could the grounds be cursed?

Now the threat of unknown enemies casts a long shadow. Should they distrust the brooding Saxon neighbor or the two weapon-bearers they hired for protection? Should they suspect either of the two women they have taken on with the other hirelings? Only their Jewish warrior friend, Ravya ben Naaman, seems to be the only one above suspicion.