Twelve years ago, my friends and family would have called me the least likely person to buy a dog.

On a Sunday afternoon, eleven years and five months ago (and before kids), my husband and I stopped at the mall on the way home from a weekend getaway. We headed toward Old Navy, but passed by a pet store.

Here's a piece of wisdom (and a bit of foreshadowing too): If you pick up the puppy, then you are going home with the puppy. 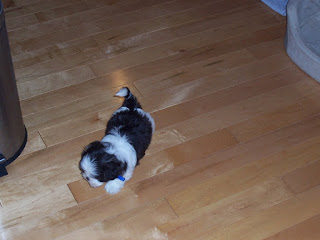 Nestled among the other shih tzu puppies, I found a 7 week old, 2.5 pound, black and white ball of fluff.

Me to my husband: Can I see the puppy?
My husband to me: You'll have to ask the store person (or something to that effect).

I watched the little puppy running around on the floor, wagging his tail so hard his whole body wiggled.

Me to my husband: Can I pick up the puppy?
My husband to me: You'll have to ask the store person.

Me to my husband: Can I have the puppy?

And the rest is, well, history.

That puppy became our first dog ever, Buddy. We had no idea what we were getting into! 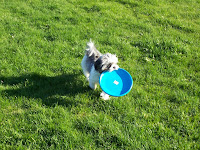 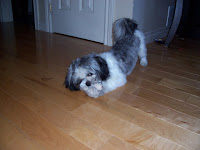 Our spoiled and very loved Mr. B. Did we train him? Or did he train us? 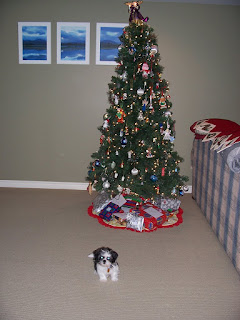 Raising Buddy was good practice for the human children. Buddy didn't sleep through the night or come potty trained. All the books in the world could not have prepared us for the impact of bringing a puppy home on a whim. He ruined the white carpet and ate the baseboards in the rec room. He finished cutting his teeth on the rungs of our dining room chairs. I never even caught him in the act. We built him a "Buddy run" so he could access the backyard from our side door. At one point, he had three beds... plus the one he slept on at night—ours.

We brought him home without a single clue how to raise him. When he cried, I rocked and sang to him. When he refused to walk outside, I picked him up. When he decided he didn't like his raw food diet anymore, we cooked his patties. Then, my husband started making homemade dog food. He's picky—I never knew a dog to be so particular—he walks around puddles and we have to coax him to eat treats—like cheese and peanut butter—that we know he likes. He sniffs the treat almost suspiciously, and we have to touch it to his lips to remind him he likes it.

Buddy was almost two when our first son was born. We brought the baby home from the hospital, put him on the floor, let Buddy smell him, and gave Buddy a toy. The traditional "here's your new sibling and here's your big brother present" that all parents follow. Buddy loves our boys. Now that the kids are a little bigger, Buddy goes to them for affection and even lets them pick him up. Sometimes. The kids don't realize how lucky they are to have a little dog to love and play with.

He grew to the husky 9.5 pounds he is today, but don't be fooled. He packs a lot of personality, not to mention intelligence, in his little self. He recognizes the sound of meat getting chopped on the cutting board and the freezer door opening (where we keep his chicken necks). He's a true creature of habit. When he's ready for bed, he'll "ruff" in the hall outside our bedroom. Our bed is too high for him to get on unassisted.

We know everything about him. He communicates with us clearly. Each bark. Each tail wag. We knew something was wrong before we took him to the vet. Buddy has congestive heart failure. His vet prescribed meds, but his days are numbered. We were told he had 2 years. That was almost a year ago. We even took him to a dog cardiologist who gave him two more months.

It's absolutely heart-breaking to think about losing Buddy. When he has trouble breathing, when he looks at us with those big brown eyes. I can't imagine life without him. No barking at the door bell or the neighbor's dog. No "ruffs" to go outside. No patiently siting by the door waiting for his walk. No sitting in the sunshine on the deck.

Buddy brings us such joy. He is the epitome of unconditional love. We couldn't have picked a better dog. Whether we have a day, a month, or another year... We cherish each moment with our little bear. 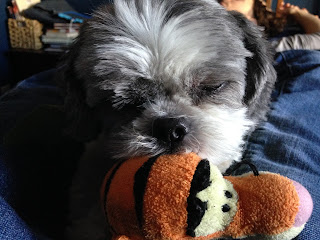