You're not alone --- straight talk from a young, gay man.

Thank you for having me on your blog. My given name is Blueford, but I like to be called Blue. I live in a small town in Texas and just became an EMT with our local fire department. We only have one firetruck and one ambulance for now, that’s how small our town is. We’re growing though, so who knows what tomorrow holds.
I, for one, can attest to how quickly and drastically things can change. In the blink of an eye, as it did for me.
It’s not very often characters get a chance to speak their minds or share their feelings. So I really appreciate this opportunity to talk about something that’s not only important to me, but just might save a life.
I’ve been a pretty lucky guy the last few months. I’ve overcome a lot of obstacles including the death of my mother. With the help of my grandmother, some of the best friends a guy could have, and an amazing boyfriend, I’m on the right track. Things could have gone very differently as it has for so many young people like me.
Too often, even in this day and age, even family and friends can’t deal with someone coming out as gay or lesbian. I was lucky in that regard, but many are not.
Equal rights for people in the LGBTQ community has been in the limelight a lot the last couple of years. Great strides have been taken in the right direction, but there’s still a lot of work to do.
The hard part is overcoming stereotypes and untruths spread by those opposed to homosexuality. Some act like being gay is a new thing. I have news for them, we’ve been around since the dawn of time.
Anyone ever heard of Liberace? How about Alexander the Great? While some tales of public figures being homosexual are just rumors, others are quite true. Regardless, most couldn’t be true to themselves for fear of being rejected by family and friends or even killed. It still happens every day all over the world.
Times might have changed for the better in the last few years, but there are still people out there who are willing to murder another human being simply because of who they love. That needs to change.
I never knew any kids like me in school, but that’s mostly because I kept to myself. I damn sure never told anyone I was gay. Not even my own mom. She always knew though, and she told me so before she died.
My boyfriend, on the other hand, had a rough time when people found out he was gay. They didn’t exactly run him out of town, but he did feel it necessary to move away and start over.
That’s actually how we met. I wish he hadn’t experienced what he did, but I am glad it inevitably brought him to me. He’s out of the closet now, and we have a pretty good life.
Too many young people live in darkness and are deeply damaged because of shame, guilt, confusion and even fear.
Some have even felt so hopeless that they’ve taken their own lives. I hear about reports of teen suicide all the time. It’s especially high among young gay and lesbian kids who feel they will never have acceptance. It’s even be worse for trans kids who are seriously misunderstood. Man, I can’t imagine how they must feel. I’d help them all if I could.
Compassion and empathy are free, and thankfully, it can be found if we know where to look. If you, or someone you know, are struggling with your/their sexuality or even gender identity, you are not alone. There are people out there who know exactly how you feel and can help you figure out what is best for your individual situation.
You don’t have to live with the pain and confusion you might be feeling. Take a step in the right direction and give yourself a chance to enjoy life and love yourself for who you are.
Here are a few places to get you on the right path: 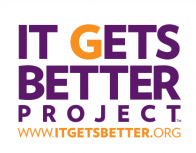 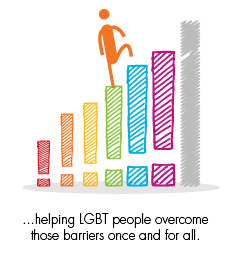 As for me, if you’re ever in southeast Texas and ever have to call 9-1-1, you just might get to meet me or my sexy boyfriend, Jack. If not, get to know both if us by picking up a copy of Heaven’s Just a Sin Away by Tyler Robbins. You can find it here: 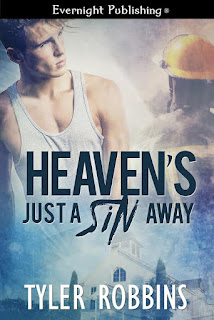 Having just lost his mother to cancer, eighteen year old, Blueford “Blue” Mason returned to their hometown of Danville, Texas to live with his reticent grandmother, Alma. The two struggle to bond while Blue undergoes a metamorphosis into manhood, discovering new things about himself, his sexuality, life, love and even heartbreak.
After leaving his former fire department due to intolerance of his sexuality, twenty-three year old, Jack West moved to Danville to work as an EMT for his uncle’s small fire department. He’d resigned himself to living a quiet life alone until Blue came along and turned his world upside-down.
Will the young lovers find acceptance in Danville or will shameful secrets from the distant past set this town ablaze when the people around them are forced to face their own shortcomings?
Heaven’s just a sin away for everyone, especially when every sin is created equally.

Blue drew in a deep breath and gripped the strong hand holding his. He peered into Jack’s dark brown eyes as they darted back and forth.
“Fuck.” Jack stepped back and shook his head. “I’m sorry. I don’t know—”
“Don’t know what?” Blue had to know. He had to hear the rest of the sentence. If he didn’t, he was certain he would explode.
“I don’t know what I was thinking just then.” Jack gestured to the space between them now. “I didn’t mean to cross any lines, man.”
Blue shook his head. “You didn’t.” He really hadn’t. In fact, Jack hadn’t even come close to crossing lines. Not like Blue wanted him to, anyway.
“Oh, shit!” Jack charged past Blue and reached for the now crackling frying pan with the steaks. Smoke and steam billowed from the top. “Damn. I think I burned them.” He set the pan aside and examined the steaks by lifting the edge of one with a fork. “Crap. There went dinner.”
Blue laughed. “You can save babies from burning cars, but you can’t cook up a couple of steaks?”
“Hey, I was dealing with an emergency. You nearly cut your finger off.”
They both laughed as Blue glanced down at his finger. “It’s not even bleeding anymore.” As their laughter quieted, Blue couldn’t help himself. He had to say something. “You’re not, you know.”
Jack’s brows pinched with apparent confusion. “Not what?”
Blue swallowed hard, his knees trembling so badly he wasn’t sure how he’d managed to remain standing. “You’re not crossing lines.”
Jack ran a shaky hand through his thick, dark locks. “Blue.”
“I’m an adult.”
“I know.” His Adam’s apple worked up and down as his gaze dropped from Blue’s eyes to his mouth.
“Just because I’m younger than you, doesn’t mean I’m too young.” It wasn’t everything he’d wanted to say, but it was good start.
Jack’s gaze felt heavier somehow, like the thoughts behind his gorgeous eyes were at odds. “I don’t know if...”

A million words could have ended the sentence, but nothing Jack said would have changed the way Blue felt. Right now, he only wanted to feel Jack’s lips. Taste him. Touch him. The way he’d done in every dream he’d had since he first met him.
“Nothing you say can change this.”
“Look, Blue.” Jack stepped closer. “I’ve had a rough year, and I don’t want my baggage to spill onto you.”
Blue scoffed, trying to thwart the ball of air stuck in the back of his throat threatening to strangle him. “You’ve had a rough year?”
Was it petty to compare? He instantly regretted the snide, selfish comment.
Jack’s eyes widened. “Shit, Blue. I didn’t mean it like that.”
“Nah, man. It’s okay.”
“No.” Jack placed his hand on Blue’s shoulder and gave him a gentle squeeze. “It’s not.”
The second Jack looked him in the eye, Blue knew. He knew beyond a shadow of a doubt that if he didn’t make a move, he might never have the courage again.
Blue rushed toward him and instantly captured Jack’s bottom lip between his own lips and teeth.
Much to Blue’s relief, Jack didn’t pull away. Instead, he pinned Blue against the counter, huffing hot breaths as he pried Blue’s lips apart and slipped his tongue inside.
Blue sucked him in deeper, swirling his tongue around Jack’s. His body trembled, and Jack hugged him close, their mouths still fused together, kissing, suckling, tasting.
Their teeth clanked between kisses, and a wave of energy Blue only experienced when he jerked off, surged through him. Holy fuck! Had he busted a nut already? He pushed the mortifying thought out of his head and eagerly followed as Jack guided them toward the sofa.
Jack laid Blue back onto the cushions and gazed down at him with a hungry look in his eyes. Between laboring breaths, Jack whispered, “Jesus, Blue. What the hell have you done?” 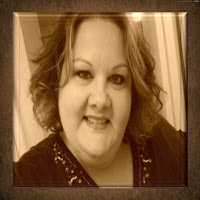 Tyler Robbins, a.k.a. Robin Badillo, is a down to earth mother of four, born and raised in a small Texas town where she still resides with her nearly grown kids and a pack of spoiled dogs.
After years of being a wife and mom, complete with company picnics and fundraisers for the P.T.A., Robin found herself starting over when her husband of fifteen years suddenly passed away in 2006. With no particular skills to speak of, Robin took the advice of friends and family, and followed her heart and passion for writing into the publishing world.
A fan of paranormal and southern romance novels, Robin does her best to offer up a plethora of tasty morsels to satisfy her reader’s appetite. Whether mainstream and/or paranormal erotic romance or Tyler’s LGBT romance line, Robin strives to create characters who are endearing and relatable.


Adversity is Robin’s motivation, which explains why she’s a true believer that grey hair is simply God’s graffiti.
Posted by Maya's Musings at 1:00 AM