Thank you so much Maya Taylor for having me on your blog today, I am so excited to be here. Let me introduce myself. I’m Jessica Stevens, wife, mother to our three J’s. Their names all begin with that letter.  It was accidental with the first two, and then they said the little one would be left out if he wasn’t a J too, as by that stage we had a dog and her name beginning with a J also. Post deliveries are fun, particularly for the boys. Master J… oops.
I have been an at home mother, cook, cleaner, chauffeur, nurse, counsellor, and referee for just over seven years.  When my children were little, I started to write a diary about our days. The funny things they would say. I remember once my daughter had been off nursery with a hacking cough. On her return they asked if she was feeling better. She said “Yes, I had flames coming out my mouth.” The nursery nurse told me that was a really good one and I should write it down so I don’t forget, and that is where it all began. I wrote little poems and made up little stories to tell them. Then a few years later some friends of mine mentioned about a M&B competition. Of course I didn’t get anywhere but I found a new passion. I joined this online writer critique group and developed from there.
Now I can proudly say I am the Author of Alana, which is a shifter story with a bit of a twist. This went on sale on 12th August and is currently number 2 on their mainstream best sellers list, and I am also number 4 in their top 25 Authors list. *grinning so much my cheeks ache*
This is the amazing cover: 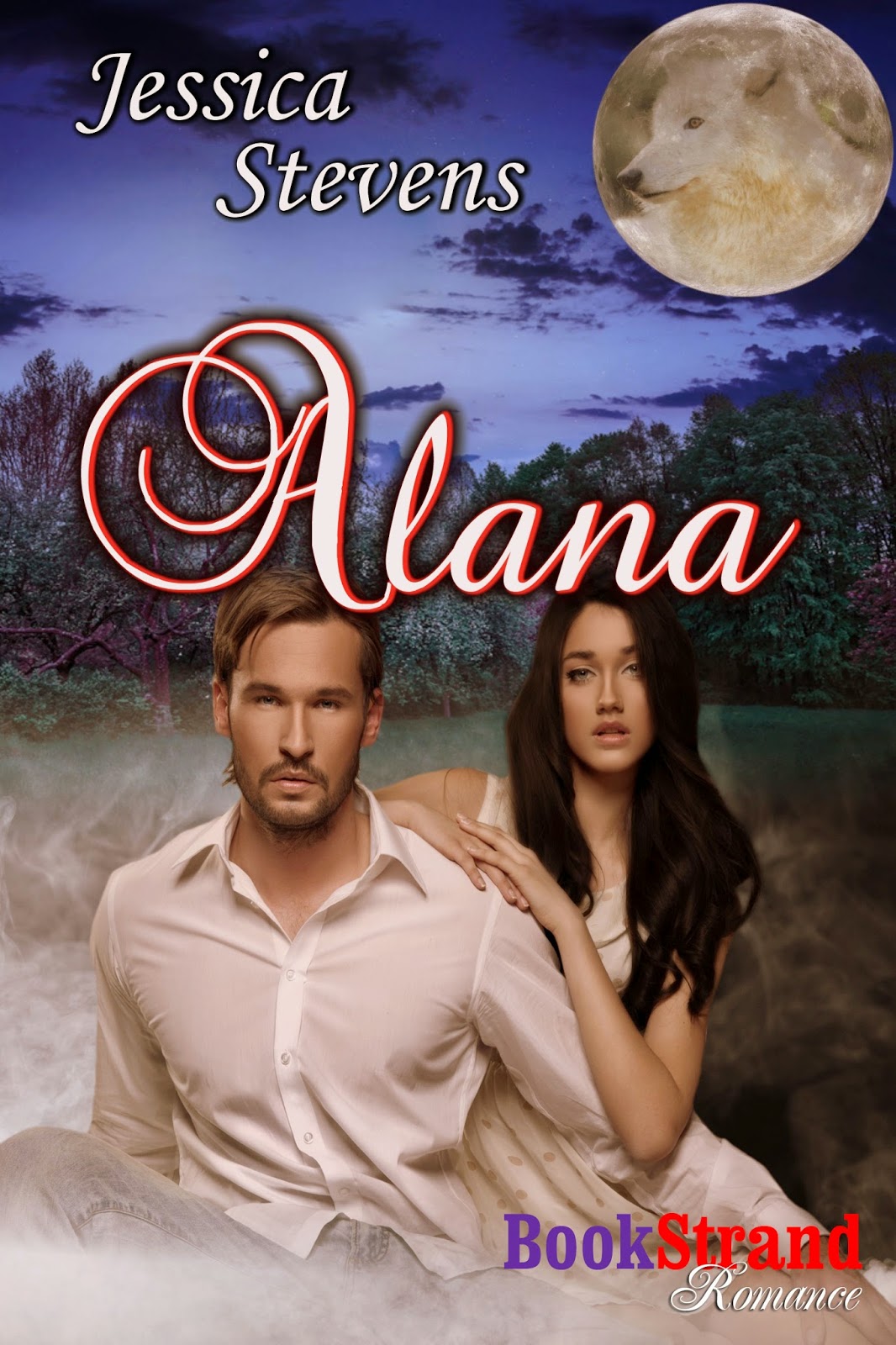 I know, stunning right? Don’t you just love the wolf in the moon!
I had better give you some inside details.

Blurb:
Alana Knight has the power to control the minds of animals, including shifters, who want her dead. A tragic past has meant that Alana has spent most of her life in hiding. Concealed as a conservationist she’s helped reintroduce wolves back into the wild. A dead body on her land proves her enemies have found her. She has no choice but to call on her protectors.

Detective Nick Valaskin has been secretly watching over Alana for years. He had vowed to protect her since coming of age. When she calls the police about a dead body on her grounds, Nick takes no chances and goes to her protection. Face to face with his childhood companion, it’s not long before passion burns between them. It puts Alana’s life in more danger than Nick could have imagined. Torn between love and a promise Nick struggles, but together they face Alana’s tragic past in the hope of preventing history from repeating itself.

“Hello, Miss Knight,” he called to her softly. She looked up at his dark, sunken eyes and couldn’t help but pity the man, having worked through the night, and still having to come and speak to her.
“Can I get you a coffee, Detective?” she asked him with a nervous smile.
He looked up at her as she stepped down off the stool and headed round the counter to the kettle, already anticipating his answer to be “yes.”
“Coffee would be great, thanks,” he replied, returning her smile. “I do need to ask you some questions, Miss Knight, about the body and the break-in to your cabin. I don’t want to keep you in the dark here, for your own safety.” He paused, so she turned around and met his gaze. She tucked her long, wavy black hair behind her ear, the way she always did when nerves got the better of her.
“We have found evidence that the two incidents are related,” Nick said, and the sugar container dropped from her hand, spilling its contents all over the side.
Alana was shaking, but she tried to clear up the mess. “I’m sorry,” she muttered. “It was just a shock, that’s all. I’m fine.” She tried to convince him as he put his arms around her. It surprised her how safe she felt in his arms. Nick then nodded to PC Cox to finish the coffee.
She walked with him as he led her out of the kitchen and into the front room.
The room had dark oak wooden floors, which were broken up by a very large, silvery cream shag pile rug, neatly placed in front of a small fireplace. The soft, inviting cream-colored sofa was placed opposite the fire, with a large bay window looking out at the access lane to her property. The walls were cream and the décor broken up with red curtains and cushions for the sofa, and a red–colored beanbag resting at the side of the fireplace.
Around the room there were other red furnishing, lamps and ornaments in the alcoves, but on the whole, it was a very minimalistic room. Usually the room made Alana relax, but that didn’t happen today.
Nick let her go as she sat on the sofa. She sat with her legs tucked up under her as she rested her head back.
If she was scared before, she was shitting herself now. She had known there was more to the body being on her land when Aatu had filled her mind with images of the murdering wolf confused with images of a man. Her fears were further confirmed when she returned to find the cabin broken into. The fact the Detective had found evidence to link the two was just the icing on the cake. And now she couldn’t contact her father.
PC Cox entered the room and placed two cups of coffee on the table next to the sofa. Alana managed a quiet “thank you” and he returned her gratitude with a smile.
“Cox.” Detective Sorin said. “You and Lang head on over to the cabin and make sure the forensics have everything they need. Then I want you to circulate the perimeter of the two buildings, see if anything gives.”
PX Cox nodded acceptance of his duties and backed out of the living room. Alana looked at the detective, who was still standing, waiting for him to speak. The silence in the room was broken with the sound of the back door closing as the other two PCs left her house.
Nerves crept through her body, and her skin crawled as the detective slowly removed his dark-grey suit jacket, his eyes focused on her. He stepped closer to where she sat and started to unbutton his shirt at the neck. Alana swallowed hard, unsure of what do to. One part of her mind told her that he was just getting comfortable, while the other part told her to run.
She drew a deep breath as he moved down to the second button. “What are you doing?” Her voice as assertive as she could manage, she tried to hide the panic. It was the way he smiled at her then that had her heartbeat thumping in her ears. It was a slow, easy smile, with eyes that twinkled with mischief as he continued to watch her. He now moved on to the third button and took another step closer to her.
Alana was about to stand up and make a dash for the door as his hand slipped inside his own shirt. Curiosity got the better of her and she sat still, waiting. He pulled out a black threaded necklace with a silver pendant the size of a fifty pence piece.
Instantly she recognized the pendant, and adrenaline pumped through her body and made her feel light headed. She stood up and reached out to touch the circular coin with the figure of a wolf’s head embossed on it. It had the word “Altor” inscribed, meaning “protector” in Latin. An old family name her father had given to his protector, as his father had done before that. She smoothed her thumb over the coin’s surface, and looked deep into the detective’s eyes, not trusting what her gut was telling her.
“Alana, your father sent me.”

Alana is available now at:
http://www.bookstrand.com/alana-stevens