Excerpt from A Fairy Godmother's Redemption:

Drew stepped a little closer to Sera, standing awkwardly under the bright lights.
The crowd chanted, “Kiss! Kiss! Kiss!”
Without warning, Sera grabbed Drew’s jacket lapels, tugging him even closer, before planting a gentle kiss on his lips. The attraction was undeniable. He wanted to drink her in. If they weren’t on stage… But they were. Drew pulled back.
Sera winked at him. “The crowd loves it.”
Will this ever end? He turned slightly, hoping to move off the stage without drawing any notice. But a twin spotlight moved over him.
Sera held the microphone in one hand, but she held him captive in her gaze. He was drawn to her intense eyes. The way she looked at him… It felt real, like she actually had feelings for him. He dismissed the ridiculous thought. This meant nothing to her. She was a performer, a talented actress.
Sera started playing the intro on her guitar. “I was incomplete; I had a missing piece. Without you in my life. Just a princess without a prince; Then I found you.”
Drew watched her, completely captivated. Her voice was amazing as always, but this song… This song was powerful. There was no other word for it.
“You make me feel beautiful; Like I'm your whole world. Everything is brighter; I feel lighter. With you in my life. So, sing with me.”
Drew felt connected to her song, compelled to join in. “Sing with me.”
Sera looked startled for a moment, then continued with the song. “Complete me.”
Drew echoed. “Complete me.”
Sera leaned in, touching him under the chin. “Be my perfect complement. I need you, My Duet at Midnight.”
As the crowd cheered loudly, Drew echoed the lyrics. “Duet at Midnight.” Then, everything faded into the background until he was only aware of one thing. Sera. The lyrics from one of his songs came to mind: Never felt like this before; Something in me wants to soar. 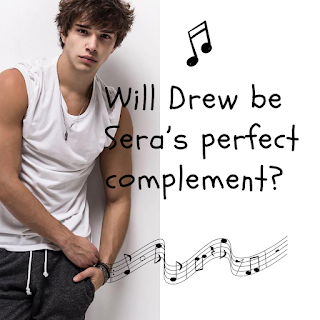