The inspiration for this week's piece is a picture from Disney's Enchanted, featuring Giselle (the soon-to-be princess) and Queen Narissa (evil stepmother to Prince Edward and soon-to-be mother-in-law to Giselle).

Fairy tales often feature an evil stepmother as the villain. Looking to my favorite fairy tale portrayals—Disney, of course—I found...

Snow White - lived with a jealous stepmother who tried to have her killed
Cinderella - lived with a jealous stepmother who made her work as a maid and limited her social interaction
Princess Aurora - raised by three magical surrogate mothers, although not technically stepmothers, after she was threatened by the evil fairy Maleficent
Princess Ariel - tricked by the sea witch Ursula in her plan to capture King Triton, although Ursula is not technically a stepmother...she does want Ariel's widowed father (Ariel's mother had been killed by Captain Hook)
Princess Rapunzel - in Disney's version, Princess Rapunzel was stolen by Mother Gothel who used the healing powers of the princess' hair to retain her youth

And don't get me started on the films that feature mother-less protagonists...


The Evil Stepmother by @mayatylerauthor 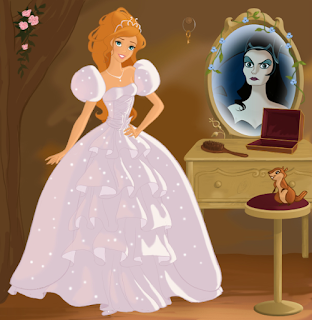 Everything she had ever wanted was within her grasp. The man of her dreams. The crown. The title of Queen. Plus one bothersome brat.


Belinda donned an appropriately sorrowful expression as she entered the sick room. "How is her majesty?"

The nurse moved to the side, revealing a pale-faced diminutive form lying on the well-appointed bed. "I'm afraid your sister doesn't have much time left, Miss Belinda."

"And nothing can be done?"

"No, Miss. The sickness came on suddenly, and she has faded just as quickly." The nurse shook her head. "Do you want to sit with her for a bit?"

The nurse ducked her head and left the room.

Belinda sat on the high-backed chair next to the bed. "Oh, sweet sister," she murmured. "How things have changed." In my favor.

Leaning closer toward the bed, Belinda watched her sister's expression change from distressed to tortured. "Are you trying to say something, Catherine?"

With her blond curls spread across the white pillow and her eyes closed peacefully, Catherine appeared to be sleeping. Belinda smirked. Like Sleeping Beauty. Except this time there wouldn't be a handsome prince coming to her rescue. Not even the charming King Cayden could save his regal wife.

Belinda chuckled. "You can hear me, can't you? But you can't speak or move. You're completely helpless. This has worked better than I imagined! Soon you will succumb to the dastardly effects of the poison, and I will be the one comforting your grieving husband."

A single tear rolled down the queen's still cheek.

"Poor Catherine." Belinda narrowed her gaze at the motionless figure. "You had everything you desired handed to you on a platinum platter. You had to but point at Cayden, and he fell at your feet. No more. It's my time now. I will marry Cayden and rule this kingdom. Once you leave us."

Belinda turned her head toward the sound. Princess Hana stood, mouth gaping, in the open doorway.

How much did she hear? Belinda forced her lips to curl into a friendly smile. "Come to auntie, dear."

Hana shook her head violently and backed into the hall.

It hadn't been the plan, but she couldn't take the risk. Belinda rose from the chair, walked toward the shaking child, and wrapped her hand around the girl's arm. "Come with me, child." She grimly escorted the princess to her chamber.