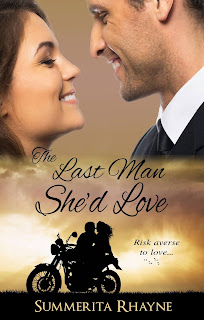 One trouble leads to another!

She agrees to visit his palatial country house, posing as his fiancée and is drawn into the family and their antics. Sorting out who's who takes time. A stringent grandfather, an ambitious mother, a frustrated half brother are only the beginning!

Propinquity with someone as charming and attractive as Guy doesn't help. But Guy himself is as much of a puzzle as ever. Is he the playboy she thinks him or is there someone else beneath the sardonic pose? Will she ever find out?

Will she break her heart in the process?

About the author:
Summerita Rhayne writes contemporary and historical romance with lots of emotional conflict. She first got published in 2013 and has won contests with prestigious publishers such as Harlequin and Harper Collins India. Her pet belief is, if the inspiration is strong enough, the story characters will find a way to make the writer pen them down, even when writing time is in short supply. When cerebrally confronted with the sizzling interaction of two Alpha characters, the only way to get peace is write their book!

At heart, she's a family person and even though she loves her medical teaching profession, she happily becomes a homemaker when not at work. She loves winding down with music, romcoms and cricket (strictly watching only).

Excerpt:
Different. The word made him laugh at his own stupidity. What he wanted to say was she looked sexy as hell, more precious than rubies, ethereal like a goddess who didn’t belong to the earth. He would never say what he wanted and far less do what he wanted which was to take her away from this party, kiss her in turn with tenderness and passion and take her to his bed.
She might go away. All too soon.
She had to, he told himself.
Of course she would. They’d been brought close by weird circumstances. Soon they’d be back at the office. Where things were sane and ideas like engagement and rings and marriage far away.
Ring. A ring for Lyna.
He turned away from her. Only to walk smack into a group.
‘Time for dance,’ they chanted. A group of men and women surrounded them and inexorably closed around them, till he and Lyna were in the center.
‘I hurt my foot playing cricket with the kids,’ he said.
Lyna looked at him and he realized he had said something wrong. Her eyes sparkled. Her chin tilted up. ‘Well, I have three left feet. Who’s brave enough to dance with me? Jashith obviously isn’t.’
Someone volunteered and soon a medium height man in a Jodhpuri coat was leading her onto the dance floor.
‘You look flabbergasted, bro,’ a friend told him. ‘You should have thought up a better excuse. And she doesn’t even dance so bad.’
‘Jashith, you should have danced with her. What’s a little toe treading when you promised to spend your life taking care of her?’ A woman chided him.
‘You were mistaken. She’s rocking the floor!’
Sure enough, Lyna who’d refused to step with him at the anniversary they had attended, now was taking twirls between two men, first with one then another.
He watched, mouth falling open as she gyrated to the beat of the music, slim waist undulating. Her footwork was hesitant but slim arms curved in a rhythmic movement, one ending up on the shoulder of her escort. He slid his arm around her waist and swept her off her feet and into a spin. People grouped around them and applauded loudly.
The other man took this as a challenge and took her back, to execute a round. Lyna’s feet became uncoordinated, but it was disregarded as he pulled her against him, her back to him and clasping her waist, went into as smooth a spin as the other man.
Everyone clapped again. Now the other man moved, but before he could more than strike a pose with Lyna, he found a hand tapping his shoulder, more peremptory than polite.
Without quite knowing when he had moved, Jashith found himself cutting onto the guy and hauling Lyna into his arms.
She was flushed and breathless. Her hands moved to his shoulders as he drew her close. People began to chant ‘Jashith! Jashith! Let’s see what you can do!’
The music changed. A salsa based song came up. He bent over her in a sensual salsa pose and she arched back. He straightened and she came up, stepping onto his foot.
‘It’s healed very fast!’ she jibed.
His wide dark gaze smiled guilelessly. ‘So it has.’
…………
Read another excerpt at: https://summeritarhayne.com/my-books/last-man-shed-love/
Posted by Maya's Musings at 1:00 AM