Since March 22—A Vampire's Tale release day and kick-off to my Goddess Fish Promotions virtual book tour—life has propelled forward in a happy blur. I've made 11 tour stops so far and loved every minute of it! My hosts have been amazing!

Check out my past stops... and make sure you enter the giveaway!


The latest updates are on the "Events and Announcements" page of my website... http://www.mayatylerauthor.com/events-and-announcements.html.

The reviews are coming in as well. Amazon.com lists 8 reviews with a 4 star average.

"... Maya Tyler has managed to show this jaded romance skeptic that there is still such a thing as a sweet love story..." Jennly Reads

"...with surprises around every corner to keep you on your toes..." TDC Book Reviews 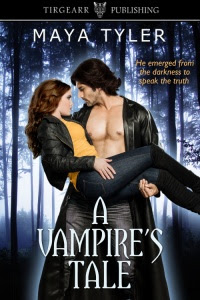 
Marisa Clements was never satisfied writing the ‘gossip column’ in the local paper and she quit her job to follow her dream of writing fiction. Floundering in an unforgiving industry, she wrote about vampires, a popular subject she considered fascinating but as real as unicorns, to pay the rent.