#CoverReveal His Christmas Delight by @summeritarhayne

His Christmas Delight by Summerita Rhayne

Blurb:
Caught by Santa!
For Myra, Christmas means supporting her friends. They rallied round getting her back on her feet after she lost Pete, her husband, so she's always ready to help any of them. No matter to what lengths the challenge makes her go. Only she didn't expect to find Santa almost catching her in her wrongdoings. Then she finds that the handsome Santa is Jay, her old high school friend. Now he's changed from a gangly geek to an attractive stranger. After missing out on the dating scene for a long time after losing Pete, she feels the first stirring of desire. But Jay is playing hot and cold, refusing to admit the attraction sizzling between them.

He’s back in Goa just for Christmas
Jay knew Myra as his best friend's girl. Now Pete is gone, but Jay is finding difficult to let go of the scars he picked up in Coast Guard service. He’s home only to help revive his brother’s toy shop. When he finds himself making excuses to stay, he knows he’s crossing the limits he’d set himself. What’s the purpose in taking this further when he knows he cannot be the one to give her the happiness she deserves?  But no matter how hard he tries, the scorching flames of wanting only seem to get stronger. How can he keep on denying the attraction between them when she insists on coming close? 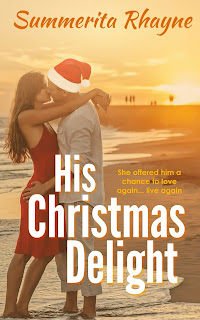 Excerpt:
‘It isn’t what you think. I didn’t refuse because of Pete. His memory is precious and it would be with me always. But I’m not hanging on to the past.’ He paused.
It went on so long she began to think she’d offended him in some way.
‘Maybe I am,’ he said slowly. ‘I meant it when I said we weren’t friends. We never were on my side. Because I’m hanging on to your memory, Myra. The memory of your lips on mine.’
Her heart stopped then began to beat fast.
‘A good kiss is like a lovely ice cream flavor. Once tasted, never forgotten,’ he said. ‘I never forgot that kiss, sweetheart. Because it was with my first crush.’ He smiled crookedly.
‘Jay...’
‘One grows out of a crush, they say. Maybe I did for a while. But then I saw you in Kochi and it started all over again. I couldn’t risk betraying myself so I wouldn’t come home.’
‘Oh Jay. I didn’t know.’
‘How could you? I was taking care you didn’t. That seemed to be a good enough reason to stay away. But now I realize I shouldn’t have. I should have come back...should’ve shared your grief with you. But all I could selfishly focus on was my feelings. After the trauma I was too raw. Stressed. They said, it was normal. It would pass. But it didn’t. It took me quite a while to get myself together. Even then I wasn’t cured.’
‘Oh Jay, you’ve been so stubborn. I could have helped you. You could have let me know.’
He smiled again. A whimsical one. Too stubborn. She saw he would never have admitted the illness that must have seemed to him like a failing. That was how most men thought of being ill. She had seen it with her father. Her brother. Even Pete.
‘I’m fine. But there are spells sometimes…’ She could see the effort it cost him to admit that.
‘What I’m trying to say, Myra, is this. I can’t go for anything steady with you. My life isn’t what it should be...what a man has who wants to offer commitment to a woman and to you I would have liked to offer that. With you, it would have to be the works. I don’t know if I can go for it. And, after what happened, the way you lost Pete, I can’t take the chance of hurting you.’
‘Oh Jay!’ She could hardly take in what he was saying. It was too much all at once.
‘When you asked me this afternoon, I realized things were going too quickly for us. I’d just got carried away seeing you again.’ He rubbed his neck. ‘And I had to stop before we got started on anything. Still, no matter what my intention, I was very rude. That’s why I had to come. To apologize. You mean too much to me to be able to brush you off like that. I had to explain. I’m not sure I’m doing a good job of it.’ He grimaced.
She knew what he wanted to say. Being honest, he’d really put it the way it was. He couldn’t dissemble. He might be wishing he’d said less because she knew intuitively he didn’t like to share his feelings.
He’d crushed on her...the way he described the kiss...oh God she hadn’t known. No wonder he’d stayed away. She and Pete had got engaged. She’d been besotted with Pete. He’d been such a good person. A great human being. Always ready to help others.
‘I might look like I’m managing well but I’m not in too good a shape.’ She pulled a face. ‘The shock of losing Pete... it took a lot out of me. However, family and friends, especially Tonya, have been a great help.’ She paused. ‘I appreciate your worry and concern but I don’t know if I’m ready to take another chance.’ She shook her head. ‘It was too painful. I am barely recovered now. In fact, I haven’t given any man a thought for so long. You’re the first man I’ve really noticed in a long while. I won’t lie, I noticed you good, Jay. But about thinking of anything serious…’ She shook her head. ‘I don’t know if I can take the risk of loving again.’
‘I understand, Myra. If ever you do, you deserve better than a damaged man. We had better accept we cannot be. Some things are just not meant to be.’
‘Jay, don’t think of yourself like that.’
He was already straightening, terminating the conversation. ‘If you need anything, I’ll be there for you. Remember that.’ He came close. He began to hug her then changed his mind. Just for a moment, his mouth swooped down on hers. She felt a rush of feeling, a hint of spice, passion and humor that was him, but before she could even hold onto him, he broke the contact.
‘Goodbye, princess.’
He picked up his keys and walked away. She waited for him to stop, say something, searched her mind to detain him some excuse but nothing came and he was soon out the door.
It was better this way. Jay was someone she could fall for. It was better to end it. Now when it was safe.
Why did it feel as though her heart was breaking anyway?
........
Author Bio:

Summerita Rhayne writes contemporary and historical romance with lots of emotional conflict. She first got published in 2013 and has won contests with prestigious publishers such as Harlequin and Harper Collins India. She’s a bestselling romance author at Amazon. She loves her teaching job as much as writing. Juggling two careers with home can be difficult but she firmly believes if the inspiration is strong enough, the story characters will find a way to make the writer pen them down, even when writing time is in short supply. When cerebrally confronted with the sizzling interaction of two Alpha characters – yes, both the hero and heroine in her stories are strong- minded in their own way -  the only way to get peace is write their book!

At heart, she’s a family person. She loves winding down with music, romcoms, cricket (strictly watching only) and social networking.
Posted by Maya's Musings at 1:00 AM