Today I have the privilege of interviewing Lori Lasswell, the talented book cover designer for Dream Hunter, my debut novella. Thank you, Lori, for the amazing cover and the opportunity to interview you on my blog.

I’m a Seattle girl by way of Tulsa. I’ve lived here for a little over five years, with my fantastic husband and a demonic cat. My primary hobbies are music, writing, and art. I work on my novels and play open mic nights around Seattle. I’ll be heading back to school in the fall, which I’m pretty excited about. It only took me 15 years, but I finally figured out what I want to be when I grow up. (Mostly grown up, at least.)


Half happy accident, half nepotism. My cousin Jinxie (NL Gervasio) started her own publishing company. I offered to help out with the graphic design to help lighten her workload. Many moons ago, I went to art school. The book covers I’ve done are pretty much the only time I’ve been paid for what my degree is in.


Jinxie and I put together a sheet for the authors to fill out with their likes and dislikes, as well as a synopsis and the book’s specs. More often than not, where I would take the cover is not necessarily what the author would like to see. I also like to take a look at what is out on the market within the same genre. I want to do something within the normal expectations, since books are definitely judged by their cover, while at the same time creating something that will stand out. More than anything, I want to create something that captures little elements of the story that reward the reader after they’ve finished the book. Though I’m not crazy about her art style, I love how intricate Mary GrandPré’s Harry Potter illustrations are. Once I’ve got a rough idea of what I’m looking for, I look through stock photos (I’ve only had the chance to do an original illustration for one cover so far.) Sometimes the ideas evolve after the images have been found. Once I start working, the covers just take on a life of their own and take shape.
I’m not sure if I have a method that I follow for each cover. With some stories the ideas happen immediately, and some go through a few different versions. The synopsis the authors provide can be handy, but not necessarily for their content. The way authors talk about their stories, and particularly the main characters, tells me more than the cover sheet will. Dream Hunter was actually a little bit different, as I was given a pre-edit version of the manuscript before doing the cover. In your cover sheet, you talked a lot about Cynthia, but when I read the book, I really felt like it was Gabe’s story. For the cover, I knew from the beginning that I wanted to incorporate the Chicago skyline. The descriptions of the city were so rich that it almost felt like the city was a character as well. 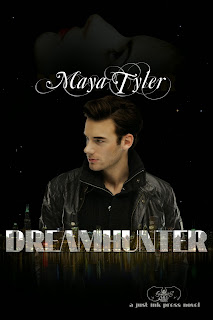 Hmmm… I don’t know if I could pick a fine artist that I’d want to chat with… but if a writer is considered an artist (I think so), I would want a sit down with Jane Austen. She wrote with a vivacity that’s proved to be timeless, and her personal life is such a mystery that I’d love to know how it shaped her work.
I’m at that magical turning point, where the next five years could be drastically different… or could be exactly the same. I’d like a tiny human or two between now and then, and I’d love to stop my neurotic editing and rewriting cycle and finally submit something to a publisher. In the grand scheme of things, I hope to someday be the crazy old lady that neighborhood kids assume is a witch. Life will be grand. 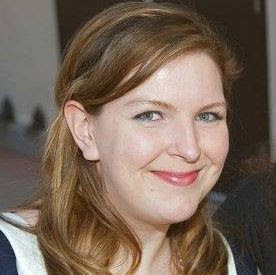 Lori Lasswell grew up in a Norman Rockwellian childhood, raised on the doctrine of a timeless parental love story. Because of her idyllic upbringing, she found muses in the romantic, the creepy, and the romantically creepy. (Creepily romantic?) After resigning herself to a lifetime of too many cats and too much coffee, she accidentally fell face first into her own whimsical love story. Lori and her long haired, pretty-boy musician husband are living out their pants optional happily ever after in the rainy Pacific Northwest, where they create and laugh to their hearts’ content.You can follow Lori on twitter at @LoriLasswell
Check out some of Lori’s cover art for Just Ink Press at www.JustInkPress.com
If you are interested in having cover art done for your own self-published works, email Lori at lori.lasswell@gmail.com to discuss the project.
Posted by Maya's Musings at 1:00 AM